In February of 1993 I learned that my Dad had pancreatic cancer and was going to die. I was 26 years old

It was hard to wrap my brain around the fact that my Dad was going to die—in fact, I didn’t believe it at first. Looking back on it now, 25 years later, I can still feel the sting of those words—Your Dad has pancreatic cancer and has about 6 months to live. It was painful to think what life would be like without my Dad. Although I understood the diagnosis, I never gave up hope that something would change, that by some small miracle, he would be cured.

My Dad decided that chemotherapy was not the right treatment for him. He understood the complications of chemo and was not interested in living his final days in that way. He embraced a macrobiotic diet (with the help of my mom’s wonderful cooking skills) and studied the teachings of Michio Kushi. He thought using natural nutrients would be more healing. I admire my Dad’s choices and the way he approached the end of his life – learning new things and teaching others. He died the way he lived.

On Father’s day I realized my Dad would not live much longer. I could see the cancer taking over his body, he had lost weight, was jaundiced and had little energy. He died a few weeks later, on July 5th, 1993.

The grief that I experienced while my Dad’s health was declining was nothing compared to the grief after he died. I was totally unprepared.

Today, I can still remember the stinging pain, deep sadness and gut-wrenching tears. My parents had been married for 30 years, and I worried about how my Mom would keep going. I worried about how my siblings and our family would get through this. My Dad always put family first, and I wondered what life would be like for all of us without our fearless leader.

I cried. I missed my Dad. I forgot things. I became overly engaged in work. I leaned on my friends for support and I worried more than I used to. About six weeks after my Dad died, while driving I stepped on the brake pedal and felt a shooting pain from my foot to my lower back. It took me 10 years to realize that this was a physical manifestation of my grief. My Dad had back problems so it made sense. What I did not know at the time was that the back pain was directly related to my grief and how I was managing my pain.

As a family, we found ways to begin to heal from the loss. At gatherings we would talk about my Dad, share stories and honor him. But two years later we faced another shattering loss. My Brother John started experiencing strange symptoms in the fall of 1995, and the next winter was diagnosed with Non-Hodgkin Lymphoma.

Could we possibly lose another family member to cancer? My Brother was young, and we thought he would be able to fight this disease. John endured a variety of tests and treatments in an effort to stop cancer. He participated in experimental treatments with the hope that they could cure him—although at some point we understood that they probably would not. He continued to participate in the hope that the research would lead to new treatments that would save lives in the future.

My Brother died in November 1996, just a two weeks after my beloved Grandma died. Her health was deteriorating during the time my Brother was fighting for his life. Grandma was 89 years old and had heart disease. Her death was hard, but it felt like the natural order of things. My Brother’s death was like being knocked over by a tidal wave. The tsunami of grief that followed was difficult and challenging.

The grief was debilitating. I couldn’t believe that this was happening again. I was angry. I wondered how could my family survive the loss of three people in such a short period of time.

Those first couple of years were the most challenging of my life. I was sad, I was angry. My faith in God was shattered. My back pain intensified. I withdrew socially. I felt that life was so unfair. Just as I was recovering from the loss of my Dad, now I was dealing with the loss of my Brother.

I was dealing with other transitions in my life, too. In the two years between the loss of my Dad and Brother, I divorced my high school sweetheart, had major surgery, and moved to Boston for a job. Now, I was facing my grief miles away from my family and friends in New York.

The grief that followed the loss of my Brother was different from my Dad. I was angry, at EVERYTHING. I was also in physical pain. In December of 1996, I spent 2 weeks in bed, unable to move because of the back pain. Emotionally I was all over the map. I began to focus on fixing the physical pain by seeing a chiropractor and massage therapist.

With time, my grief shifted and changed. I wasn’t in physical pain all the time anymore. My anger faded, and I became more social. I missed my family and friends and moved from Boston to New York in 2000. It was nice to be close to everyone again. As a family, we were managing through all the changes, and life continued forward. We continued forward as a family, adjusting to the new dynamic and family roles. 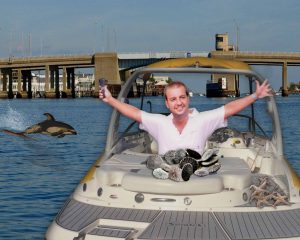 [Dreamscape of my brother

Now, 20+ years later I see my grief in a different way. I know that I grew as a person and learned about myself through my struggles with grief. Although the pain was unbearable at times and life changed, I survived and even thrived. I’ve built a successful career, I have great friendships, a supportive family and I’m finally pain-free. Emotionally, I’m strong and capable of handling my feelings and emotions.

Grief has a different place in my life now than it did 20 years ago. I chose to become a grief counselor, to work with people who are in the throes of grief and working through the life changes that happen after a loss. This has been the most rewarding path for me, to be able to give back to others with knowing and understanding for what they are going through.

My grief comes and goes, and I interact with it in different ways. The loss is always with you and the memories of those you love do not fade. They stay strong and alive within you. However, you’re not creating new memories, so the memories you have are old and need to be nurtured. I nurture them by talking with others about the memories I have, laughing about good times or sharing an anecdote about my Dad or Brother. I talk about them both with the people who knew them and others who never had the opportunity to meet them. By talking about them, I connect them to my life in the present moment.

I also know to pay attention and respect how I’m feeling. I continue to feel sad when I think about my Dad and Brother’s deaths and I still have waves of intense grief. Sometimes this happens around significant events, anniversaries, holidays or special days. I often have waves of grief whenever I’m struggling with a decision or experiencing a difficult life challenge, it’s in those times that I wish my Dad or Brother were here to talk with, to help me think through the decision and support me.

Grief never goes away, but we find ways to make it our friend.